A dark money group wholly funded by House Bill 6 beneficiary and Columbus utility giant American Electric Power contributed $350,000 toward the campaigns now at the center of a racketeering and bribery case that ensnared House Speaker Larry Householder, an investigation by The Dispatch finds.

Empowering Ohio’s Economy Inc., a nonprofit operated solely with AEP funds, gave $150,000 to Generation Now, another dark money group that received $60 million from FirstEnergy-related interests to ensure passage and survival of a $1 billion ratepayer bailout of a subsidiary’s pair of nuclear power plants.

Empowering Ohio also gave $200,000 to the Coalition for Opportunity & Growth, which is related to a similarly named political action committee that donated $1 million to the 2018 campaigns of Householder-favored Republican candidates to help ensure that he had their votes to become speaker.

An affidavit filed by an FBI agent in the racketeering case details spending of $350,000 by an unidentified “interest group that was funded exclusively by $13 million from another energy company that supported HB 6.”

A source close to the investigation confirmed to The Dispatch that the energy company is American Electric Power, a publicly traded company that serves 5.5 million customers in 11 states and earned $2.1 billion last year.

The “social welfare” nonprofit is not required to disclose its donors or the source of its funding.

The Columbus Dispatch has learned that the reference to an “energy company” in this part of an FBI affidavit refers to Columbus-based American Electric Power. (Photo: FBI)

The board of Empowering Ohio’s Economy – which approved the HB 6-related spending – includes AEP’s top lobbyist, one of Republican Householder’s predecessors as House speaker, a former congressman and a friend of Republican Gov. Mike DeWine.

AEP spokesman Scott Blake said the utility has not been contacted by investigators “and none of the wrongful conduct in the criminal complaint involves AEP or its subsidiaries. Neither AEP nor any of its subsidiaries made any contributions to Generation Now.”

The utility gives to a variety of social welfare nonprofits, including Empowering Ohio’s Economy to support its mission of promoting economic and business development and education programs, he said. AEP does not comment on specific contributions or amounts, he added.

“These contributions were done appropriately, and we have every reason to believe that the organizations we support have acted in a lawful and ethical manner,” Blake added.

AEP benefited from the passage of House Bill 6 with its six-year-plus extension through 2030 of a monthly surcharge of up to $1.50 on Ohio electricity customers. The fee generates about $50 million a year to subsidize a pair of old coal-burning power plants it partly owns in a consortium with other utilities.

The plants – Kyger Creek near Cheshire, Ohio, and Clifty Creek near Madison, Indiana – were built in the mid-1950s to supply electricity to the former uranium-enrichment plant near Piketon, Ohio. AEP owns the biggest stake in the coal plants at 43% and buys about 60% of the electricity generated by the plants.

The board of directors of Empowering Ohio’s Economy includes Thomas Froehle, vice president of external affairs for AEP – its top lobbyist. He testified before the General Assembly in support of House Bill 6. AEP registered 23 lobbyists to work the 132 lawmakers to pass the legislation last year. A message seeking comment was left with Froehle. AEP confirmed he remains a board member.

Other board members include former Republican House Speaker Jo Ann Davidson; former Congressman David Hobson, R-Springfield; and J.B. Hadden, a lawyer who has represented AEP and a friend to DeWine. Hadden, president of the nonprofit’s board, was treasurer of DeWine’s 2014 attorney general re-election campaign.

“I don’t know what they were up to,” Hadden said of Generation Now and Coalition for Opportunity and Growth, adding he did not recall which board member sought the funding. He said he never discussed the matter with DeWine.

The group’s address is listed as the Downtown office of Davidson, who serves as secretary-treasurer. A working telephone number for Hobson could not be located.

The Coalition for Opportunity & Growth, the independent expenditure political action committee which received $200,000 from the AEP dark money group in 2017, the dark-money Coalition & Opportunity PAC that backed Householder candidates and Generation Now all were incorporated by Eric Lycan, a lawyer and Republican consultant in Lexington, Kentucky.

While not identified in the affidavit, the Coalition for Opportunity & Growth cash went largely unused until early this year when it went out to support Householder-blessed candidates in the GOP primary, the FBI affidavit said.

The FBI affidavit said First-Energy interests provided $390,000 to the group, which paid $54,000 to Generation Now, $191,000 to a media-placement firm, $200,000 to a public relations firm and $100,000 to JPL & Associates, a firm controlled by Jeff Longstreth, Householder’s top political aide. Longstreth is among those arrested and facing up to 20 years in prison if convicted in the HB 6 case.

Despite those amounts, the Coalition for Opportunity & Growth reported spending only $102,835 in its filings with the Federal Election Commission.

Empowering Ohio’s Economy spent $3.7 million between 2016 and 2018 (its 2019 tax form was not available) on a variety of charitable and civic endeavors. Its biggest expenditure of $750,000 went to the host committee of the Republican National Convention in Cleveland in 2016.

It also gave $300,000 to the Capitol Square Foundation, of which Davidson is a board member and which benefits the Statehouse, and $250,000 to Two Paths America, a nonprofit created amid former GOP Gov. John Kasich’s 2016 presidential run to promote his positions.

Householder and four others were arrested Tuesday following an FBI investigation that captured phone calls, text messages and recordings of meetings centering around the alleged pay-to-play scheme described by U.S. Attorney David DeVillers as the largest public corruption case in Ohio history.

This report was provided by the Columbus Dispatch, part of the USA TODAY Network.

Congress Has Many Ways To Boost The Economy By Getting Cash Into People’s Pockets. Which One Is Best?

Sun Jul 26 , 2020
MIAMI SPRINGS, FLORIDA – JULY 16: Carlos Ponce joins other demonstrators participating in a protest … [+] to support the continuation of unemployment benefits. (Photo by Joe Raedle/Getty Images) Getty Images As Congress scrambles to pass another COVID-19 relief bill, it must decide how best to put money into the […] 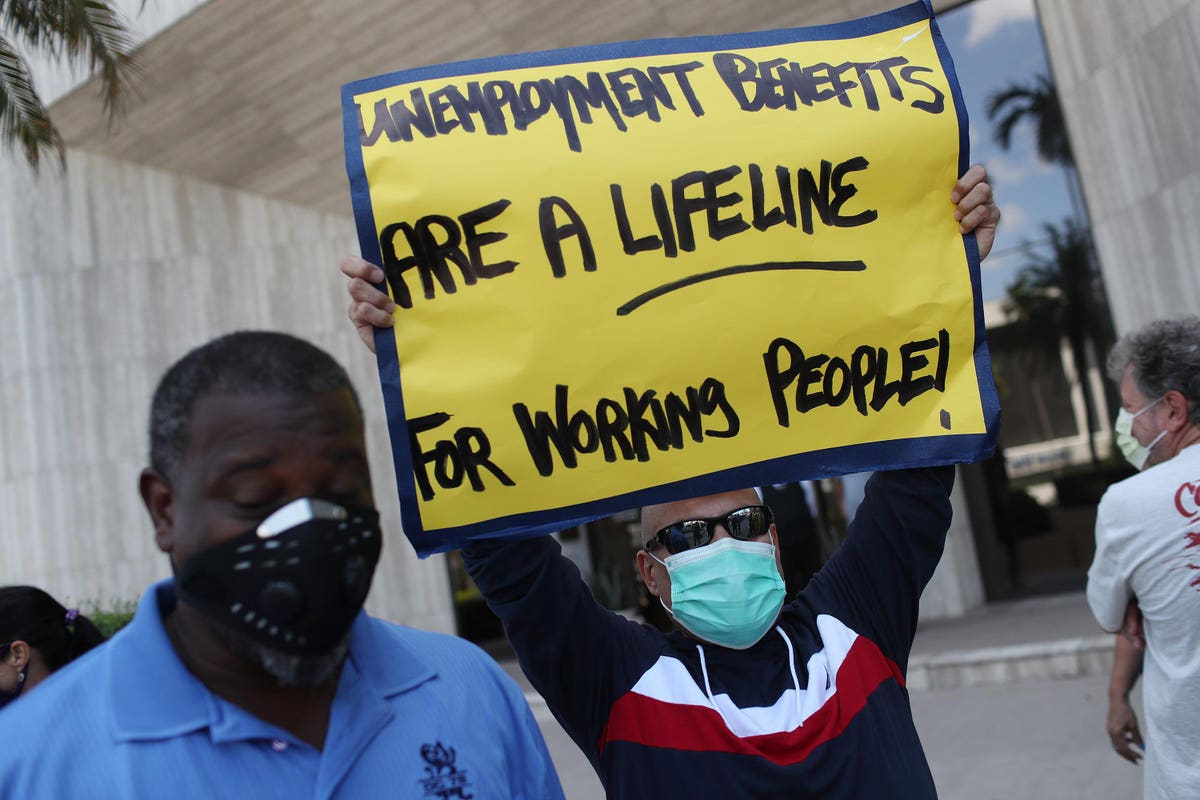